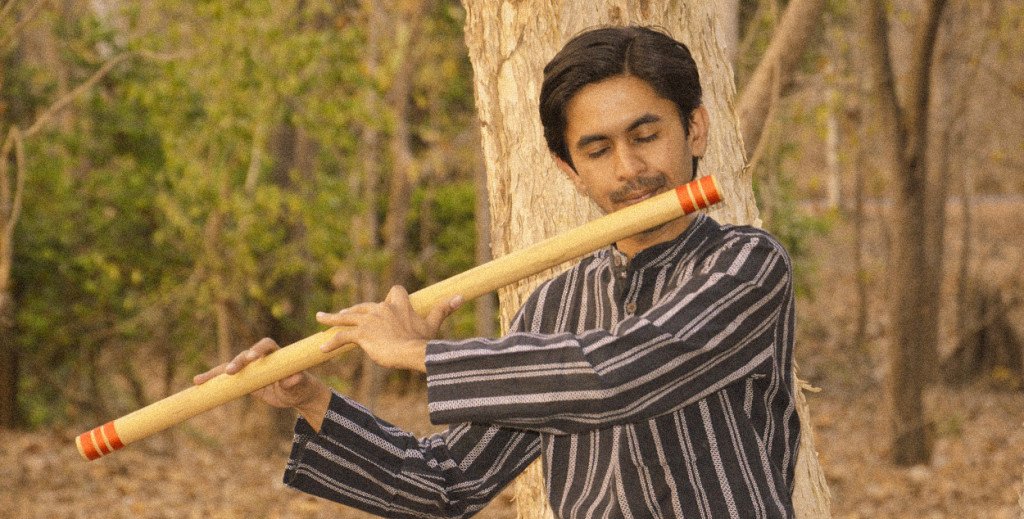 An eminent classical flautist, Venugopal S Hegde is an acclaimed artiste for his soulful music and pure classical rendition of the ragas. Intense and luminous are the qualities that distinguish his Flute concerts. His flute reveals a unique style, which is a synthesis of his rich musical experience, his vibrant imagination and spiritual inclination.

Spiritual Music has always been Venugopal’s heart’s desire. He received the Initiation in to bansuri flute from Pt Ramchandra Kulkarni. Since then, he has been pursuing the music with passion and dedication. Later on, Venugopal stayed in Mumbai to gain advanced musical knowledge from classical music veterans Vidushi Kishori Amonkar, Pt.Babanrao Haldankar and Pt. Nityanand Haldipur.

The sweet tonal grace, rhythmic elegance, and depth as well as lucid expression evident in Venugopal’s playing are the result of his continuing advanced training and guidence under Pt. Nityanand Haldipur. It embodies the reputed teaching traditions of the Senia gharana and follows the same riyaz and commitment that has produced great maestros of Indian classical music. Venugopal Hegde’s style of playing comes from the celebrated Maihar-Senia Gharana. His playing style has the perfect blend of gayaki-ang (vocal style) and tantrakari-ang (instrumental style) in the presentation of Hindustani Classical Music.

To the rigours of such a preeminent tradition of Indian classical music, Venugopal has added his own dedication and finesse through painstaking practice, creative imagination and erudite presentation. Absorbing what is pure, beautiful and dignified in Hindustani classical music, Venugopal has imbibed the difficult discipline and subtleties of the rich legacy he has inherited. While his Dhrupand-ang alaps and the distinctly formatted jod are serene, contemplative and introspective, his drut renderings are lilting and filled with fascinating variety of Tantrakari taans, Layakari and Rhythmic patterns.

As a performing artist for over 20 years now, Venugopal has travelled extensively in his career. He has been featured in many of the prestigious venues of Indian classical music. He received the First place in National level AIR music competition in 2002, and he is now an All India Radio Accredited artiste. He has been awarded top prizes in many of the national level youth festivals in India. He has also received the ITC Sangeet Research Academy Mumbai Award for promising artists in Hindustani music.

Venugopal has performed at several music conferences including the Mallikarjun Mansur Sangeet Sammelan, Sawai Gandharva Sangeet Sammelan. Music lovers and critics alike have acclaimed his imaginative and haunting rendition of ragas. He has given numerous concerts in Dharwad, Bangalore, Mumbai, Luknow, Pune, Delhi, Jamshedpur, Thiruvanthapuram, Chennai and in many major cities in India. His performances are replete with unexpected, sweet and breathtaking improvisations.

Venugopal has contributed immensely in the field of classical music. Apart from giving conerts all over India and filling hearts of the people with joy and mystifing them, he is a renowned teacher in the field of Indian Classical Flute. Many of his students are giving individual concerts. He has been awarded “Samskritika Guru” in recognition with his immense contribution in the field of teaching Flute.

Venuganapriya Academy of Music was founded by Venugopal S Hegde in 2008 with the vision of providing a platform to learn the pure form of Indian classical Bansuri music to aspirants around the world via in person and video conferencing courses. Hundreds of students have learnt basics of Bansuri and many of them are continuing their advanced learning in the academy since many years. In Venuganapriya Academy Indian classical Bansuri music is learnt in the tradition of Senia Gharana, in which importance is given to purity and serenity of the ragas and the belief that Ragas are sung and played for one’s own happiness and self-elevation.